Yesterday me and my better half, Ulrika, took the kids on a small adventure to a near by nature reserve, Kjugekull.  The site is locally famous for it’s large boulders and beautiful views and nature. In addition to this it´s also said to be the largest and best site in Sweden for an activity called “Bouldering“, a form of rock climbing.  Rock climbing was not on the schedule for my family though. We did just fine navigating the footpaths with sometimes narrow passages between the big boulders and enjoying the nature and the view from the small hill. The hill, which is 66m ASL, is some kind of ancient monument, probably a old fortification. It offers a stunning view of the surrounding landscape in this otherwise flat area.

View from the top of the hill towards Kristianstad.

The footpath in the forest among the big boulders.

The adventure got me started thinking about the SMFF activity, Swedish Flora and Fauna Diploma, that is quite popular here in Sweden. When I checked If the reserve ever had been activated for the Diploma, I found that It had not.  This maybe a good testing ground for my QRP kit?

When we finally got home I got some inspiration to start working with the antenna for the QRP kit. I figured that if i wanted to activate the site in the SMFF i needed an antenna for at least 40M band working nationwide stations. However, I wanted the possibility to work European stations aswell so I decided to make it a dual band antenna covering the 20M band in addition. 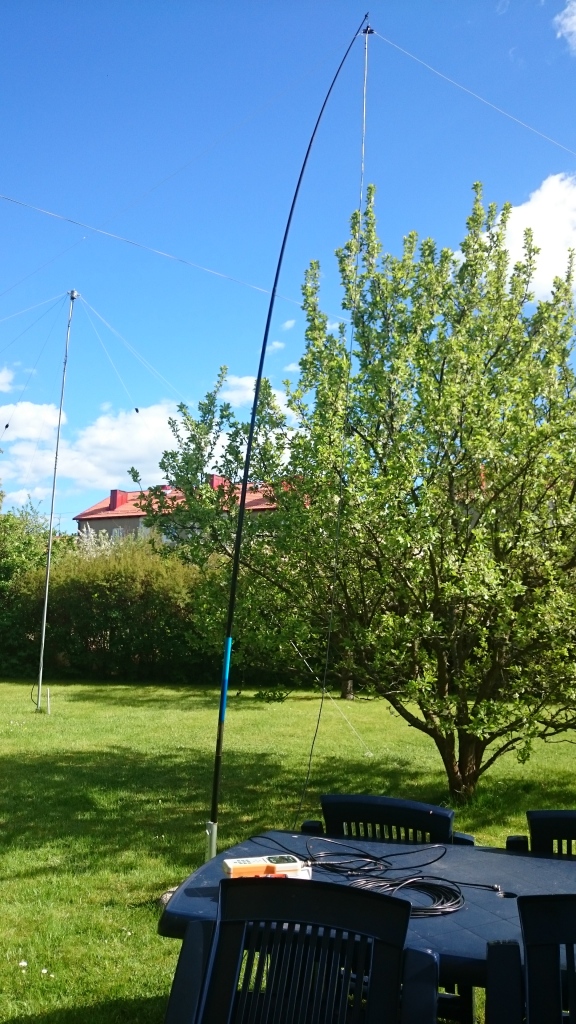 Testing under way with the Rigexpert AA30

I went down in the basement to search for a 40M dipole that i knew I had hidden somewhere in the junkboxes and of course found it rather quick for a change. 🙂  The dipole was set up with a fishing rod in a Inverted V configuration and testing began. After some tweaking I got the SWR just right in the passband.

Spot on with the antenna.

Instead of making it a “four legged beast” with separate legs for the 20M band, I decided to make it a linked dipole. So I started to measuring exactly where to make the link according to my calculations, cut the dipole, mounted the links and the strain reliefs and made a second measurement on 40M band. Now the SWR curve had moved up in frequency but with some adjustment to the wire connecting to the isolators i managed to nearly the same result as before the modification. On 20M the result was that the dip in SWR was a bit higher than expected but still under 1:1,5. I decided that this was acceptable and relocated the antenna closer to the shack so that I could sneak the 11m RG-58 cable through the window next to the radio counter inside.

The antenna was tested mainly on 40M throughout the evening with some acceptable results. The conditions was not that great which was verified with the stationary 40M dipole in the garden.  So, now I have almost all the things I need for the kit. The only thing missing is a good way for suspending the fishing rod to the ground. Lightweight and inexpensive, any ideas? 🙂